Slavery and the Romantic Imagination 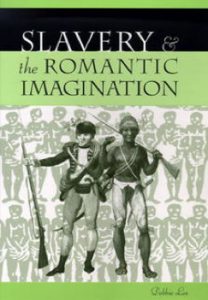 “In the broadest sense, this book asks: what is the relationship between the artist and the most hideous crimes of his or her era?” –Introduction, Slavery and the Romantic Imagination

Selected by Choice magazine as an Outstanding Academic Title

This lively new study explores the diverse ways in which British Romantic writers responded to the ‘great moral question’ of their era, that of slavery. . . . A valuable reconstruction of a key aspect of the cultural imagination of the Romantic period. —Times Literary Supplement

A major contribution to the cultural understanding of Romanticism. Though there have been studies of Romanticism and slavery, none has the range of historical reference and the broad interpretive contexts provided by Lee. —Alan Bewell, University of Toronto

The Romantic movement had profound social implications for nineteenth-century British culture. Among the most significant, Debbie Lee contends, was the change it wrought to insular Britons’ ability to distance themselves from the brutalities of chattel slavery. In the broadest sense, she asks what the relationship is between the artist and the most hideous crimes of his or her era. In dealing with the Romantic period, this question becomes more specific: what is the relationship between the nation’s greatest writers and the epic violence of slavery? In answer, Slavery and the Romantic Imagination provides a fully historicized and theorized account of the intimate relationship between slavery, African exploration, “the Romantic imagination,” and the literary works produced by this conjunction.