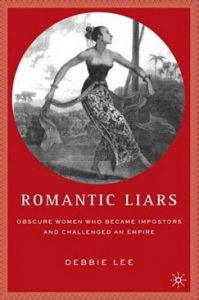 “Imposters are successful because they tap into powerful cultural myths and because they have an uncanny ability to reflect our own personal fantasies back to us.” –from Introduction to Romantic Liars

The stories told by Debbie Lee in Romantic Liars–of women who led fake lives and fooled a great many people–are extraordinary. The details of how they got away with their impersonations for as long as they did remain fascinating, and Lee is lives to the sensational aspects of many of these tales, which are told in an easy and informal style. –Sharon Ruston, The Times Literary Supplement

Lee skillfully weaves together biography and cultural history to bring out the social implications of imposture: why is the impostor a transgressive figure? why do they become celebrities? what function do they serve? Almost all of Lee’ s impostors are women who disguised themselves to create social opportunities which they lacked through gender and class prejudice. –Nick Groom, Romanticism on the Net

Lee unfolds the stories of six women with a cast of supporting characters such as Samuel Taylor Coleridge, Benjamin Franklin, Stamford Raffles and Napoleon against the grand narrative of England’s 18th century empire building. This book is a meticulously researched, spellbinding tale of tragedy, transformation and triumph in the age of reason.