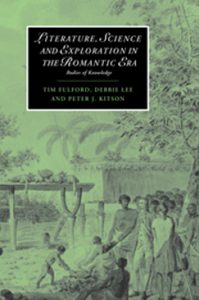 “In 1768 Britain had been launched on a new voyage by Cook and Banks: now, in 1833, the course was altering.” –Conclusion, Literature Science and Exploration: Bodies of Knowledge

In 1768, Captain James Cook made the most important scientific voyage of the eighteenth century. He was not alone: scores of explorers like Cook, travelling in the name of science, brought new worlds and new peoples within the horizon of European knowledge for the first time. Their discoveries changed the course of science. Old scientific disciplines, such as astronomy and botany, were transformed; new ones, like craniology and comparative anatomy, were brought into being. Scientific disciplines, in turn, pushed literature of the period toward new subjects, forms and styles. Works as diverse as Mary Shelley’s Frankenstein and Wordsworth’s Excursion responded to the explorers’ and scientists’ latest discoveries. This wide-ranging and well-illustrated study shows how literary Romanticism arose partly in response to science’s appropriation of explorers’ encounters with foreign people and places and how it, in turn, changed the profile of science and exploration. Coauthored with Tim Fulford and Peter J. Kitson.

An important requirement for the establishment of knowledge is knowledge of the establishment. the authors of this well-researched and fascinating book have illustrated this truth more amply than they concede. –Robert Fraser, Modern Language Review

This is a wonderfully provocative book, replete with broad speculations, new ideas, forgotten facts, and neglected histories. Jointly conceived by three authors, it represents the best of interdisciplinary inquiry and scholarly engagement. The clarity of its introduction assures from the start an ongoing usefulness to students, general readers, and scholars. –Hermione de Almeida, Clio: A Journal of Literature, History, and the Philosophy of History

“Race theory, child labour, geography and exploration, imperialism and Orientalism, literature, medicine, natural history and natural sciences, war and politics, vaccination and electricity make for a heady cocktail. The authors’ emphasis of key theme and their use of Banks and Coleridge as key figures make for a coherent and stimulating study.” –Trevor H. Revere, The Wordsworth Circle